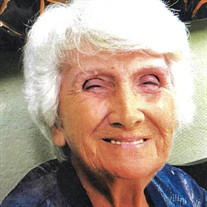 Wanda Fay Littlepage, age 88, of Ozark, Arkansas died Thursday, February 25, 2021. She was born November 22, 1932 in Clinton, Arkansas to Bob and Naomi Emerson Neldon. Wanda was a devoted wife and mother; she was a very good cook, best known for her homemade biscuits and chocolate gravy. She was one of Jehovah’s Witnesses from her late 20’s onward. She enjoyed Witnessing to others about her faith, as well as instilling into the hearts of her children. She was diagnosed with crippling arthritis in her 30’s but was determined not let it define her or cripple her. She was told by doctors that she would be in a wheelchair before she was 40; however she never was, even at 88. She married Everett Littlepage from MT. Top, Arkansas in 1952, they were married 68 years. She is preceded in death by her husband by ten months; her parents; three brothers, Harold , Wavel and Kenneth Neldon; two sisters, Hester Lewis and Willie Bixler. She is survived by a son, Marvin Littlepage of Kansas City, Missouri; two daughters, Debbie Graves of North Little Rock, Arkansas and Becki Smith of Ozark; five grandchildren, Storm and Kent Smith of Ozark, Samantha Marshall of Little Rock, Arkansas, Kinsey Littlepage of Columbia, Missouri and Farrah Littlepage of Lee’s Summit Missouri; and one great grandchild, Axel Littlepage-Holmes of Lee’s Summit. A family memorial service will be held at 1:00 PM Saturday, March 13, 2021, if you would like to attend the Zoom Memorial Service please call Debbie at 501-425-8160 for the Zoom meeting number. Cremation arraignments were made by Shaffer Funeral Home of Ozark.

The family of Wanda Fay Littlepage created this Life Tributes page to make it easy to share your memories.

Send flowers to the Littlepage family.