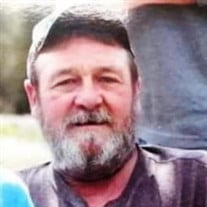 Wallace Edward Williams age 66 of Cecil, Arkansas died September 9, 2021 at home. He was a heavy equipment operator on the pipeline. He was born March 14, 1955 in Ozark, Arkansas to Wallace Edward and Jettie Cagle Williams. He is preceded... View Obituary & Service Information

The family of Wallace Edward Williams created this Life Tributes page to make it easy to share your memories.

Send flowers to the Williams family.