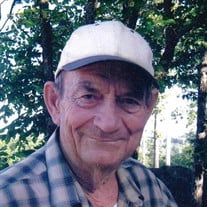 Truman L. Sanford, 84, of Ozark, Arkansas died Friday, July 5, 2019 in Fort Smith, Arkansas. He was a Mechanic, an Army Veteran, and was of the Baptist faith. He was born December 29, 1934 in Loraine, Texas to Frank and Flora Forbus Sanford.... View Obituary & Service Information

The family of Truman L. Sanford created this Life Tributes page to make it easy to share your memories.

Send flowers to the Sanford family.