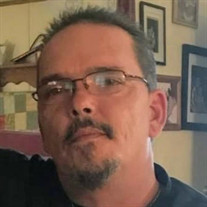 Timothy E. White-Bandido; Rev was born on January 28, 1979 in Osceloa, Arkansas. His life was tragically taken on August 6, 2020 in a motorcycle accident. He was 41 years old. Tim was employed by GA Foods where he delivered meals to the elderly and disabled members of the community. He worked for the company for six years. He loves and was loved by every person he delivered to. He is preceded in death by his mother Shirley White. He is survived by his wife Crystal Gayle White, his four children Clayton Jordan, Summer White, Raven Yates, and Savannah White; two step-children Catherine Campbell, and Matthew Campbell. He leaves behind his father Donald White; three brothers, Justin White and wife Tina, Chris White and wife Alecia, and Brandon White; one sister, Ashley Callahan and husband Ray; as well as five nephews and two nieces. Rev leaves behind numerous Brothers in the Bandidos Motorcycle Club as well as the Red and Gold Nation. Tim believed that family was the most important thing in life. He loved spending time with his children, taking them fishing at his favorite spot on the Arkansas River, riding 4-Wheelers, camping, or just sitting around playing board games with them. He loved going to family gatherings, birthday parties, working on something with his brother, or just sitting around visiting. If you ever became a friend with Tim, you didn’t stay just a friend for long, you became family. Other than family, the one thing that Tim was most proud of was becoming a member of the Bandidos Motorcycle Club. He began his journey into The Red and Gold World in June of 2014 when he became a member of the Thunderheads Motorcycle Club. He was a Thunderhead for five years and was the State Secretary for the Club. In September of 2019 he began prospecting for the Bandidos Motorcycle Club and became a full member on February 29, 2020. Tim was a proud member of the Bandidos Motorcycle Club, Cypress Creek Chapter in Arkansas. He was known for his jokes and stories, some of which were wildly inappropriate, but will be sorely missed. He loved riding his motorcycle and being with his Bandido Brothers. Rev was a Brother who didn’t have an ounce of quit in him. His memory will be honored and cherished by his Brothers Worldwide. Rev may have joined the Forever Chapter, but he will always be a Backwoods Bandit Forever. He is Gone but not Forgotten. A memorial service will be held on Saturday, August 15. 2020 at the Old Country Church located at 5129 HWY 64 Ozark, Arkansas with J.D. Ellison officiating. The family has requested that any flower arrangements be Red, Gold, or a mixture of both. Serving as Honorary Pallbearers are Bandido Patrick 1%ER and Bandido Buck 1%ER.

Timothy E. White-Bandido; Rev was born on January 28, 1979 in Osceloa, Arkansas. His life was tragically taken on August 6, 2020 in a motorcycle accident. He was 41 years old. Tim was employed by GA Foods where he delivered meals to the elderly... View Obituary & Service Information

The family of Timothy White created this Life Tributes page to make it easy to share your memories.

Send flowers to the White family.