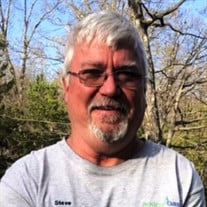 Steven Ray Spencer, Age 60 of Ozark Arkansas, died Saturday, September 4th, 2021 in Fort Smith Arkansas. Steve was born on July 25th, 1961 in Philadelphia, PA to Ralph and Minnie Lou Harrison Spencer. He was raised in Coal Hill, Arkansas and graduated from Coal Hill high school in 1979. He started his career with Arkansas Western Gas in 1987 and retired after 34 years from what is now, Black Hills Energy in 2020. Steve was a man of many talents. He was an avid outdoorsman and enjoyed spending his time hunting and fishing with a specific passion for turkey hunting each Spring. If he wasn’t hunting or fishing, you could find him in the garden or the kitchen cooking or canning the products of his harvest. He was proud of his kitchen creations and would often gladly share the goodies he made with his family and friends. He was musically gifted and could play anyone a song on the banjo, guitar, fiddle, piano, mouth-harp, or any other instrument he could pick up. Growing up, he toured with his family playing folk-music shows and festivals including shows at Silver Dollar City. Anyone that knew Steve, would agree that he never met a stranger. He was always willing to lend a helping hand to anyone in need. He was ready to lift anyone up with a smile, a prank, or a made-up joke or two. His greatest love was his family and he enjoyed spending time with them. He met and married his wife and partner in everything, Penny Spencer, in 2003. They enjoyed any time spent together flea-marketing, playing a game of Yahtzee, cooking, or fishing. He was a member of Calvary Baptist Church in Ozark, Arkansas and was a living example of the love of Jesus. He is survived in death by his wife, Penny Spencer of Ozark Arkansas; his parents, Ralph and Minnie Spencer of Clarksville, Arkansas; his Sister Kathy Stewart and husband Tim Stewart of Palmer, Alaska; his brother John Spencer and his wife Kendra Spencer of Salesville, Arkansas; his children Hannah and Shane Niblett of Lincoln, Arkansas; Craig and Carah Spencer of Greenwood, Arkansas; Breann and Jake Cromwell of Springdale, Arkansas; Cole and Mary Spencer of Fort Smith, Arkansas; Dwan and William Powers, Adrian Myers, Leslie and Cody Harty all of Ozark, Arkansas. He was very proud to be a gramps to his grandchildren, Clayton, Paisley, Elijah, Ezra, and Molly Cromwell, Tinley, Taylor, and Weston Spencer, Kirstyn, Kaytlyn, and Zoey Myers, Soraya, Tristen, and Ashlyn Powers. He is preceded in death by his grandparents, Archie and Henrietta Harrison, John Allen Spencer, and Jim and Dollie Holt. Visitation will be held from 6:00-8:00 pm on Tuesday, September 7th at Shaffer Funeral Home 2315 West Commercial Street in Ozark. Graveside Services will be held at 10:00 a.m. on Wednesday, September 8th at Hickory Grove Cemetery 9136 Mountain Top Road Ozark Brother Gib Allen officiating under the direction of Shaffer Funeral Home. In lieu of flowers, a donation can be made in Steve’s honor to National Wild Turkey Federation. Pallbearers will be Nick Childers, Charlie Reames, Jeff Hurst, Bruce Haney, Craig Spencer and Cole Spencer. Honorary pallbearers: Everyone who ever had the privilege of Steve touching their life.

The family of Steven Ray Spencer created this Life Tributes page to make it easy to share your memories.

Send flowers to the Spencer family.