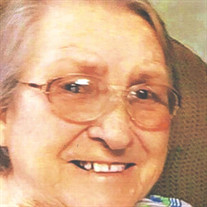 Stella Sue McCain, age 86, of Alma, Arkansas, died Wednesday, February 24, 2021 at home. She was born December 4, 1934 in Mulberry, Arkansas to Claude and Golda Marie Morse Peters. She was a retired poultry farmer and of the Baptist Faith.... View Obituary & Service Information

The family of Stella Sue McCain created this Life Tributes page to make it easy to share your memories.

Send flowers to the McCain family.