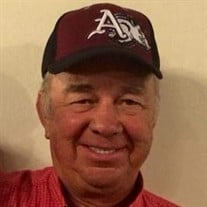 Shelley Don Henson, age 75, lifelong resident of Mulberry, Arkansas passed on from this life Thursday, April 7, 2022 surrounded by his loving family. He was a talented mechanic, heavy equipment operator, lover of hot rods and Ford race cars. You could always find him watching NASCAR, starting brush fires, bird hunting or looking for the next opportunity to laugh with old and new friends. Daddy, Papa, Towbar, companion, brother, and friend. Shelley was synonymous with many titles and one-of-a-kind. He was self-assured and lived life on his own terms but always had time for a laugh or a good prank. He had the ability to make everyone around him feel special and always left you happier than you came. He had a true love for entrepreneurship, from owning gas stations, his own business for nearly 40 years, and most recently a mom and pop restaurant in Mulberry with Beth. He never missed an opportunity to make a new friend. Shelley was the fourth-born child to the late Clyde Lesley Henson and Fleeta Beckham. He was born January 16, 1947 at their home in Mulberry. Shelley was preceded in death by his parents, his high school sweetheart of 48 years, Judy Ward Henson; two sisters, infant sister Doris Marie and Linda Carrol Freeman; and three brothers, Larry Dean, Gary Wayne, and Clyde Stephen “Stevie” Shelley is survived by one sister Dottie Goodnoh; two sons, Kevin and wife Donna Henson, Sheldon and wife Marilyn Henson; one daughter Michelle and husband Dr. Greg Gambill; his loving life partner Beth Acosta of the home; seven grandchildren, that mean the world to him, Chelsa Henson, Josh Millsap, Brandie Kangas, Brett Gambill, Jessica Putman, Madison Gambill, and Paul Gambill; seven great-grandchildren; and his friends and loved ones that are a list too long to name. He will be dearly missed by all. Visitation will be 5:00 P.M. to 7:00 P.M Sunday, April 10, 2022 at Shaffer Funeral Home Chapel, 2315 W Commercial Street in Ozark. Funeral service will be 2:00 P.M. Monday, April 11, 2022 at Shaffer Funeral Home Chapel, Ozark with Brother John Parrish officiating, under the direction of Shaffer Funeral Home. Pallbearers are Marty Goodnah, Brett Gambill, Craig Henson, Brenn Henson, Josh Millsap, and Paul Gambill. Honorary Pallbearers are Champ Cagle, Bobby Henry, Don Brigance, Randy Edwards, Al Adams, Ron Adams, Buddy Nixon and Walter Shepherd. To leave and online memorial visit www.shafferfuneralhomeweb.com

The family of Shelley Don Henson created this Life Tributes page to make it easy to share your memories.

Send flowers to the Henson family.