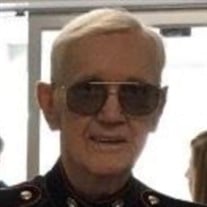 Retired Sergeant Major USMC Dennis L James went to be with our Lord Jesus July 23, 2020, after a brief illness. He Lived in Ocala, Florida with his wife Vesta of 61 years. He was born in Watalula, Arkansas to Earl and Lilly James on September 9, 1929. He was preceded in death by his parents Earl and Lily James; his Sister Ruby Gladys Easom; four brothers, Paul Ray James, KD James, Willis James killed in World War II in the Philippines, and Lewis James. He served honorably in the USMC for 31 yrs., which included both the Korean and Vietnam wars, and took part in the Saigon evacuation in 1975 on board the Aircraft carrier USS Midway. He received the Purple Heart Medal as well as numerous medals and many commendations. He retired at the distinguished rank of sergeant Major. He later went on to retire from the Marion County School System as a bus mechanic, where he forged many great friendships. He was a member of Ocala First Church of the Nazarene in Ocala, Florida where he often served as an Usher. He loved riding in his golf cart to his favorite eatery, Northgate Diner, where he had many friends. He loved his breakfast and loved his coffee. Above all, he loved his Heavenly Father, his Country, and family and many friends. He had many military adventures he was eager to share. He was a wonderful Man, Husband, Father, Grandfather, greatest grandfather, Soldier and loyal friend. He did whatever needed to take care of his family. Heaven has gained the greatest solider, man, father and friend to ever grace this world. We will remember him for who he was and rejoice that we shared time with greatness. We are thankful that we have a soldier a United States Marine at the table with the lord and he is advocating for his family and friends He is Survived by, his wife Vesta Fields James; three daughters, Denena Griffin, Delisa Davis and Deronda Kinlock all of Ocala. Two sons, Dwight James of Jacksonville, FL and Edward Gilbreath of Hot Springs, AR; seven Grandchildren, Jessica Davis, Joshua Davis, Kelli Griffin, Hannah James, Kanyon James, Jana Robertson, and Courtney Cansler; ten Great-Grandchildren, Ashton Montanye, Abel Montanye, Noel Davis, Lorelei Davis, Charlie Wildy, Harley Robinson, Daysi Robinson, Mason Robinson, Rielyn and Sutton Cansler with his first Great-Great-Grandchild, Arya Peco on the way. He had numerous Nieces and Nephews that he loved dearly. He was loved and respected by all he met. Yea, though I walk through the valley of the shadow of death, I will fear no evil: for thou art with me; thy rod and thy staff they comfort me. Psalms 23:4 It is wonderful to know that when we walk through the valleys not only is the Lord there for us this amazing Man is right beside us as well. Open visitation will be held from 2:00PM until 9:00PM Friday, July 31st at Shaffer Funeral Home, 2315 West Commercial Street Ozark. Funeral service will be held 2:00 PM Saturday Aug 1, 2020 at West Park Baptist Church in Ozark, Arkansas with Burial at Highland Cemetery under direction of Shaffer Funeral Home . He will have a Full Honors Military Service with Marine Pallbearers. We Love You Papa and You will be greatly missed. Thank You for the Joy and honor you brought us. Semper Fidelis (Always Faithful) Sergeant Major Dennis James USMC Salute! Non sibi sed patriae!( Always Courageous) To leave online condolences visit: www.shafferfuneralhomeozark.com

Retired Sergeant Major USMC Dennis L James went to be with our Lord Jesus July 23, 2020, after a brief illness. He Lived in Ocala, Florida with his wife Vesta of 61 years. He was born in Watalula, Arkansas to Earl and Lilly James on September... View Obituary & Service Information

The family of Sergeant Major Dennis L. James created this Life Tributes page to make it easy to share your memories.

Retired Sergeant Major USMC Dennis L James went to be with our...

Send flowers to the James family.