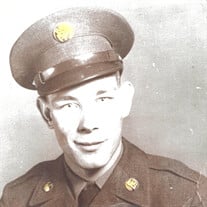 Samuel Dewey Stover, 89, of Denning, Arkansas, died Thursday, December 19, 2019 in Ozark. He was a Coal Miner, a farmer, and a Korean War Veteran of the United States Army and recipient of the Bronze Star medal. He was born December 22, 1929... View Obituary & Service Information

The family of Samuel Dewey Stover created this Life Tributes page to make it easy to share your memories.

Send flowers to the Stover family.