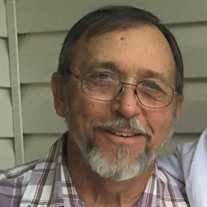 Ronald (Ronnie) Eugene Durham, 70, of Ozark, Arkansas died Monday, January 4, 2021 in Fort Smith, AR. He was a retired owner/operator over the road truck driver for fifty years, was a member of the Coal Hill Assembly of God Church, and a veteran of the United States Air Force. He was born March 29, 1950 in Seymour, Indiana to Robert “Bob” and Mary Williams Durham. He was preceded in death by his parents and an infant daughter, Darla Jean Durham. After retirement he loved working on various renovation projects. He would be the first to lend a hand to remodel a house for a friend or do handyman chores at the church, but his favorite was to paint many a wall for his daughters and grandchildren or any other project his wife, Donna, told him needed to be done. Ronnie was an avid Ham (amateur) radio operator and spent hours conversing with friends, Darrell and Mark along with numerous acquaintances he made around the world. Ronnie loved and was loved by all four legged creatures and could never turn away a stray in need. Ronnie is survived by his wife, Donna Davis Durham of Ozark; three daughters, Sherry Nuckolls Shock and husband Dewayne of Fort Smith, AR, Cindy Nuckolls Alexander and husband Nick of Dallas, Texas, and Shawnda England of Madison, Indiana; a sister, Barbara Woodson and husband Bob; three brothers, John Durham and wife Cora, Mike Durham and wife Lauren, and Gary Durham and wife Mault all of Indiana; and four grandchildren, Samantha Durham, Noah Brown, Nicholas Alexander, and Olivia Shock. Memorial service will be held at 2:00 PM Thursday, January 7, 2021 at Shaffer Funeral Home with Reverend John Kendricks officiating under the direction of Shaffer Funeral Home of Ozark. Honorary Pallbearers; Mike Franklin, Mark Warner, Nick Williams, Darrell Boyett, Archie Don Davis and Kevin Davis Cremation arrangements were made under Shaffer Funeral Home of Ozark. In lieu of flowers and to celebrate his love of all fur babies, donations or adoptions can be made at the Charleston Dog Shelter, Lee Western Road, P.O. Box 118 Charleston, Arkansas.

Ronald (Ronnie) Eugene Durham, 70, of Ozark, Arkansas died Monday, January 4, 2021 in Fort Smith, AR. He was a retired owner/operator over the road truck driver for fifty years, was a member of the Coal Hill Assembly of God Church, and a veteran... View Obituary & Service Information

The family of Ronald "Ronnie" Eugene Durham created this Life Tributes page to make it easy to share your memories.

Send flowers to the Durham family.