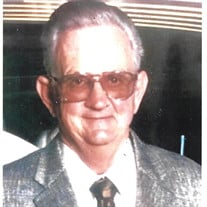 Ronald Dean Inman, age 81 of Ozark, Arkansas went to his heavenly home Saturday, March 27, 2021. Ron, known as Big Ron or Prune Picker by his friends and family, was born on March 16, 1940 in Denver, Colorado to Ernest Roy and Bernice Irene Johnson Inman. Ron married the love of his life, Jean Inman, September 19, 1959 and together they raised three daughters; Cherie, Shellie, and Terri. They would have been married 62 years this year. For the past several years, Big Ron helped his daughter Terri run Second Street Antiques in Ozark. He loved to interact with the customers and was always looking for the next deal. Ron also enjoyed traveling the country and never met a stranger. He is preceded in death by his wife and his parents. He is survived by his three daughters, Cherie Patalik of South Carolina, Shellie Harty and husband Richard of Ozark; and Terri Hodge and husband Paul of Ozark; one granddaughter, Amy Wood of South Carolina; five grandsons Joshua Hatch of South Carolina, Daniel Hodge, Kris Hodge, Cody Harty and Dillon Harty all of Ozark; five great-granddaughters; three great-grandsons; one sister, Donna Woodward and husband Woody of California; two brothers, Norman Inman and wife June of Texas, and Gordon Inman and wife Nancy of California. Graveside Funeral Service will be held at 2:00 PM Tuesday, March 30, 2021 at Highland Cemetery in Ozark with Brother Oliver Thomas officiating under the direction of Shaffer Funeral Home of Ozark. Open viewing will be held from 5:00 PM to 9:00 PM Monday March 29, 2021 and 8:00 AM to 12:00 PM Tuesday March 30, 2021 at Shaffer Funeral Home 2315 West Commercial Street in Ozark.

The family of Ronald Dean Inman created this Life Tributes page to make it easy to share your memories.

Send flowers to the Inman family.