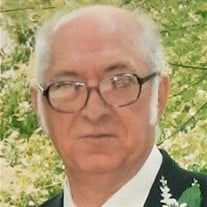 Robert “Junior” Arnold Johnson, age 78, of Alma, Arkansas passed away peacefully, Monday, March 7, 2022 in Fort Smith, Arkansas. He was born May 29, 1943 in Hartman, Arkansas to Arnold and Gladys Lancaster Johnson. Junior was born and raised in Hartman and later graduated with the class of 1961. He was a Vietnam Veteran in the Army and retired after 32 years at Baldor as a Computer Analyst. Junior enjoyed hunting, fishing, the casino, spending time with family, especially his grandkids. He is preceded in death by his parents, his wife of 47 years, Wilma “Babe” Baker Johnson, three brothers: Thomas “Tommy” Johnson, Charles “Chig” Johnson, Hector Johnson; and three sisters: Ruth Fultz, Liladean Johnson, and Clara “BB” Harkreader. Junior is survived by one daughter: Shanna and husband Kris Hathaway of Alma; one son: Todd and wife Angela Johnson of Arvada, Colorado; one sister: Frances “Tootle” Cohrs of Clarksville, Arkansas; five grandchildren: Haleigh and husband Zach Ross, Brianna Joslin, Caleb Hathaway, Michael and Tiffani Johnson; and two great grandchildren: Derik and Lahna Ross. In honor of his wishes, there will be “no sad funeral” but a celebration of his life held in the near future. Cremation arrangements were made under the direction of Shaffer Funeral Home of Ozark. To leave an online memorial visit www.shafferfuneralhomeweb.com

The family of Robert "Junior" Arnold Johnson created this Life Tributes page to make it easy to share your memories.

Send flowers to the Johnson family.