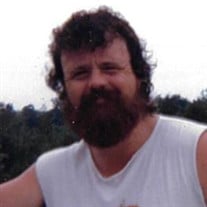 Rick W. “Rigger D” Mayfield of Ozark, Arkansas has passed from this earthly world on July 17, 2020 in Fort Smith, Arkansas following an accidental fall in his home. He was born July 1, 1957 in Ozark to, and preceded in death by, his mother Shelba J. Pledger Barham and father Billy W. Mayfield. He was married to and widowed by Maureen “Denise” Mayner Mayfield, who could brighten any day with that smile, twinkling eyes and bubbling laughter. Although having no children of his own Denise blessed him with the opportunity of helping to raise her three children. Camella Campbell Johnson and Wesley T. Campbell of Ozark, and Brandi Shock of Vilonia, Arkansas. Those children in turn blessed him with being a grandpa to Hailie and Jadie Johnson, and Braxton White all of Ozark, Mick William “Wild Bill” Campbell, Kaidence Campbell of North Carolina, and Jeradon and Jacob Shock of Vilonia. He is survived by two sisters, Beverly J. Davis of Ozark and Lisa K. Sampley of Altus; and numerous nieces, nephews, and friends. He lived in the Ozark/Altus area most his life with the exception of his hitch in the U.S. Marine Corp where he did a tour in the FIGI Islands. He studied respiratory Therapy but spent most of his adult life working as a Roughneck in the oilfield. Before the days of computerization, anger management reprimands, and air conditioned dog houses, when fingers were lost in gloves, toes were frozen in steel toe boots, and 150 lb tools were heaved around on the rig floor where you’d stick to frozen metal in the winter and worked a shift in greasy, sweat drenched clothes in the sweltering Arkansas heat. But that’s what he did for the most part and seemed quite fond of the memories of those days and the men he worked with. He retired a mechanic Tech from Ford. Rick lived out his days on Cataberry Run in his dream home he and Denise built a few years before his passing. He wore many hats in his day, the hat of a son, a grandson, a brother, a cousin, an Uncle, a Dad and a Grandpa, and he built many lifelong friendships, but most of all he was a Marine. SEMPER FI Corporal. Graveside service will be held 10:00 AM Thursday, July 23, 2020 at Liberty Cemetery under direction of Shaffer Funeral Home. To leave online condolences visit: www.shafferfuneralhomeozark.com

The family of Rick W. "Rigger D" Mayfield created this Life Tributes page to make it easy to share your memories.

Send flowers to the Mayfield family.