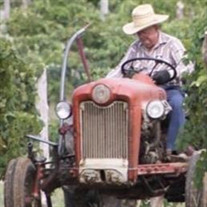 Richard Henry Leding, 93, of Altus, Arkansas, passed away on August 8th, 2020. Richard was born in Altus, Arkansas on August 6th, 1927 to Henry and Amelia Schneider Leding. He was a veteran of both the Second World War and the Korean War, and he was the owner and operator of Leding Vineyards until he retired at the age of 90. Richard married Geraldine Rofkahr on October 25th, 1952. They were married for 67 years. He enjoyed listening to music and watching his favorite shows on television. He loved farming. The vineyards and former peach orchards were a pride and joy of his. He loved holidays and all of the decorations that came with them. But most of all, he loved loving his family. Richard was proud of his kids and all of their accomplishments, and the biggest smile adorned his face when any of his friends and family would enter the room. Richard was preceded in death by his parents, his son Duane Leding; brother Norbert Leding; granddaughter April Gilbert; grandson Denver Leding, and other family and friends that went before him. He is survived by his wife Geraldine; four sons Rickey Leding and wife Angel of Altus, David Leding and wife Barbara of Yukon, Oklahoma, Martin Leding of Altus, Albert Leding and wife Janet of Altus; three daughters Judy Helmert of Ozark, Janice West and husband Clint of Altus, Roberta Dorrough and husband Sam of Ozark, twenty-two grandchildren, thirty-five great-grandchildren, one great great-grandchild, numerous nieces and nephews, and many family and friends. Open visitation will be Tuesday, August 11th at Shaffer Funeral Home from 8am-3pm. Funeral Mass will be held Wednesday, August 12th 10:00am at St. Mary’s Catholic Church with Father Pius Iwu officiating under the direction of Shaffer Funeral Home. Due to Covid-19, the family asks that only family be in the church during rosary and funeral mass. All are welcome to attend the graveside portion of the ceremony at St. Mary’s Catholic Cemetery, Altus, Arkansas. In lieu of flowers, memorial donations may be made to St. Mary’s Catholic Church, Altus, Arkansas. The family of Richard H. Leding wishes to thank all of those who reached out with words of encouragement and love during these difficult times. To leave online condolences visit: www.shafferfuneralhomeozark.com

Richard Henry Leding, 93, of Altus, Arkansas, passed away on August 8th, 2020. Richard was born in Altus, Arkansas on August 6th, 1927 to Henry and Amelia Schneider Leding. He was a veteran of both the Second World War and the Korean War, and... View Obituary & Service Information

The family of Richard Henry Leding created this Life Tributes page to make it easy to share your memories.

Richard Henry Leding, 93, of Altus, Arkansas, passed away on...

Send flowers to the Leding family.