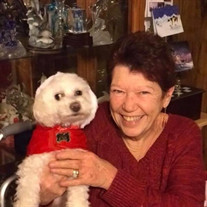 Rhonda Lynette Marvel, age 65, of Altus, Arkansas died Saturday, August 1, 2020 in Fort Smith, Arkansas. She was a retired School Nutrition Manager at Ozark School District, a Christian of the Assembly Of God Faith, and a former member of the... View Obituary & Service Information

The family of Rhonda Lynette Marvel created this Life Tributes page to make it easy to share your memories.

Send flowers to the Marvel family.