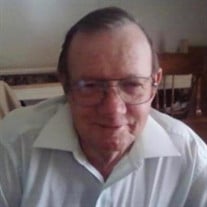 Ray Walker, age 77, of Charleston, Arkansas died Wednesday, January 27, 2021 in Fayetteville, Arkansas. He was a mechanic, a Jehovah&#8217;s Witness and attended the Kingdom Hall in Ozark, Arkansas. He was born June 2, 1943 to Arnold and Betty... View Obituary & Service Information

The family of Ray Walker created this Life Tributes page to make it easy to share your memories.

Send flowers to the Walker family.