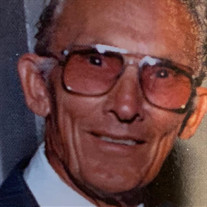 Ray Hullen Rice, 89, of Altus, Arkansas died Saturday, July 20, 2019 in Altus. He was a heavy equipment operator and a member of the United Pentecostal Church of Altus. He was born June 30, 1930 in Diggers, Arkansas to Ray and Lora Arnold... View Obituary & Service Information

The family of Ray Hullen Rice created this Life Tributes page to make it easy to share your memories.

Send flowers to the Rice family.