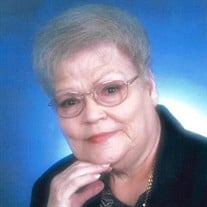 Patsy E. Smith, age 77 of Alma, Arkansas died Monday, August 16, 2021 in Fort Smith, Arkansas. She was retired from the Bank OZK and a member of the Rye Hill Baptist Church in Fort Smith. She was born August 19, 1943 in Cravens Community, Arkansas... View Obituary & Service Information

The family of Patsy E Smith created this Life Tributes page to make it easy to share your memories.