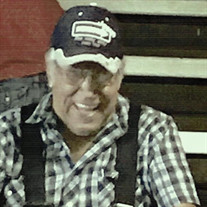 Mella “Mel” Everett Towell, age 86, of Ozark, Arkansas died peacefully at home on Wednesday, June 23, 2021. He was a retired cattleman and a former owner of Towell Mercantile in Dalton, Arkansas and the Pocahontas Livestock Auction. A member of the Open Range Cowboy Church in Ozark, he was a devout Christian and loving father. Born April 6, 1935 in Beech Grove, Arkansas to Chester and Mayfair Piety Towell, he was preceded in death by his parents; an infant sister, Meredith Towell; and three brothers, Glenn, Dennis and Jim Towell. After graduating from Lynn High School in 1954, he moved to Rockford, Illinois where he served as general foreman at Reed Electra Mat where his team developed the very first dollar bill changer. Returning to Arkansas in 1968, he owned and operated the Towell Mercantile in Dalton, Arkansas. In addition to his livestock business, Mel sold insurance for Auto Club of America. After his retirement in 2015, he spent most of his time working on his farm, the T-Bar where he worked his cattle and trained horses and mules. He often took his wagon and his favorite team of horses to events at Paragould Children’s Home, Jonesboro Human Development Center, church events and schools where he gave free wagon rides. The one thing that “Papas” may have enjoyed even more than his cattle and horses was spending time with his grandchildren and later his great-grandchildren. He is survived by his wife, Dr. Marcia Hillard-Towell of Ozark; two sons, Jeff Towell of Pocahontas, Arkansas and Mark Towell of Dalton, Arkansas; two daughters, Nikki Jo Towell of Paragould and Rhonda Rothgeb and husband Dave of Mammoth Springs, Arkansas; eight grandchildren, Mark and Jacob Towell, Derek and Tyler Powell, Matthew, Justin, and Ryan Gifford and Laura Lee; and fourteen great-grandchildren. Visitation will be held from 1:00 PM to 2:00 PM Wednesday, June 30, 2021 at Shaffer Funeral Home 2315 West Commercial Street Ozark, Arkansas. Funeral Service will be held at 2:00 PM Wednesday, June 30, 2021 at Shaffer Funeral Home with Brother Tommy Herndon and Brother Zach Belt officiating under the direction of Shaffer Funeral Home with burial at Highland Cemetery. Pallbearers will be Ken Belt, Aaron Brauer, James Hillard, Daxter Sharon, Brian Smith and Michael Watkins. Memorial Donations can be made to The Open Range Cowboy Church, 267 Airport Road, Ozark, Arkansas 72949 and The Children’s Home, 5515 Walcott Road, Paragould, Arkansas 72450.

Mella &#8220;Mel&#8221; Everett Towell, age 86, of Ozark, Arkansas died peacefully at home on Wednesday, June 23, 2021. He was a retired cattleman and a former owner of Towell Mercantile in Dalton, Arkansas and the Pocahontas Livestock Auction.... View Obituary & Service Information

The family of Mella "Mel" Everett Towell created this Life Tributes page to make it easy to share your memories.

Send flowers to the Towell family.