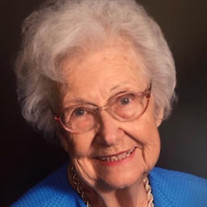 Melba Jean Reynolds Jones Beel was born in Altus, Ark on Feb 21, 1932 to Flora and Dell Reynolds. She finally received her heavenly reward on August 15, 2020 after battling dementia for the past 2 years. A long time resident of Ozark, Ark, Melba spent the last 8 years in Baton Rouge at Lake Sherwood Village retirement center, where she was very active in starting a Bible Study class, doing visitation to residents who were ill, Welcome Wagon for newcomers, and turning her floor into a home by hosting all kinds of parties for the residents on her wing and decorating it for all seasons – just like she did at home in Ozark! She was recognized for her holiday decorations and honored every year at the special luncheon for resident volunteers. The first thing you noticed when you met her was her big smile! She married Hudson “Wimpy” Jones in the late 1940’s and, with him, ran the Wimpy Jones Motel and Restaurant for most of her working years. She was a fabulous cook and, when asked what her special ingredient was, would respond that “LOVE” is what made her dishes so tasty! When asked what her proudest accomplishment was, she would quickly say, her family. She was so proud that all 3 of her children attended college, because education was so important to her. When the children were little she read to them and stressed the importance of education and good grades. She was active in her children’s school, helping build floats, chaperoning many Ozark High School Band trips, raising funds as a member of the band boosters, helping daughter Phoebe with her science projects, and just simply being available to help out any way she could. She was a member of the First United Methodist Church of Ozark for 60 years. She headed up Bible School and taught Sunday School. Her children’s friends were always welcome in her home and, to this day, they still talk about the “ghost walks” in the cemetery and the ghost stories she told. Even years later, many of them would stop by just to say hello as they passed through Ozark. She also had a green thumb, and her flower gardens were her pride and joy! After moving to Baton Rouge in 2012 she joined the Broadmoor United Methodist Church, where daughter Prissy and son in law Roger play in The King’s Pipes flute quartet. She was blessed with two grandchildren who spent much time with Grandma Melba and Grandpa Wimpy. Many picnics, fishing trips, and day trips were enjoyed by all. After Wimpy’s death in 1991, she went to work at Wal-Mart as a people greeter – which was perfect for her since she always had a big smile and welcome for all! She reconnected with high school friend Doug Beel at a class reunion and they were married in 1997. After his death she moved back to Ozark, until deciding it was time to spend time with her daughter, Prissy, who had always lived far away. In Baton Rouge she quickly made friends with residents of LSV, but Prissy’s friends always wanted to spend time with Miss Melba too! They especially loved it when she would make her famous pies and have a “Pie Party” that was always well attended!! At Lake Sherwood Village she was known for her decorating of the common areas, especially her ‘Fall Tree’ and Christmas Decorations. The residents and staff of Lake Sherwood were so happy that she brought all her traditions and decorations to their floor and made it like home for all of them! Melba was preceded in death by her mother, Flora Powell Reynolds and father, Dale Reynolds, husband Hudson Jones, Sr and Doug Beel, son Hudson Jones, Jr and all her brothers and sisters. She is survived by daughters Phoebe Jones of Lonoke, Ark and Pat “Prissy” Wattam and her favorite son in law, Roger Wattam, of Baton Rouge, LA, Granddaughters Laura Ann Cagle and husband Brian Cagle of Ozark and Sara Jones of Little Rock, great grandchildren Justin Franklin of Fort Smith, Ark and Marlee and Kaylee Cagle of Ozark, great great grandchildren and many nieces and nephews and step children in California. We would like to thank her caregivers who took such good care of her this past year, and especially during the Covid Lockdown so that she was not by herself, and the staff at Lake Sherwood Village, Ollie Steele Burden Nursing Home, and Pinnacle Hospice, who all made her final days very peaceful. Graveside service will be held 2:00 PM Tuesday, August 18 at Highland Cemetery in Ozark, Arkansas; Under direction of Shaffer Funeral Home. In Lieu of flowers please make a donation to your favorite Church or the First United Methodist Church, 503 W Commercial St, Ozark, AR 72949. To leave online condolences visit: www.shafferfuneralhomeozark.com

Melba Jean Reynolds Jones Beel was born in Altus, Ark on Feb 21, 1932 to Flora and Dell Reynolds. She finally received her heavenly reward on August 15, 2020 after battling dementia for the past 2 years. A long time resident of Ozark, Ark,... View Obituary & Service Information

The family of Melba Jean Beel created this Life Tributes page to make it easy to share your memories.

Send flowers to the Beel family.