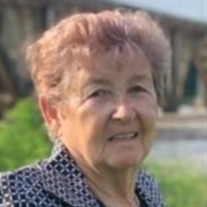 It is with great sorrow on Earth but rejoicing in heaven that we share the unexpected passing of our precious mother, Maxine Reed McIlroy. Born September 20, 1936 in Oark, AR, she was just shy of her 84th birthday. Maxine lived an amazing life... View Obituary & Service Information

The family of Maxine Reed McIlroy created this Life Tributes page to make it easy to share your memories.

It is with great sorrow on Earth but rejoicing in heaven that...

Send flowers to the McIlroy family.