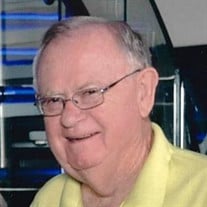 Gene Talbert passed away at home in Ozark, Arkansas, on October 10, 2019 after a brief illness. He is survived by Linda Talbert, his loving wife of eighteen years. Other local kin includes Linda's son, Craig Cook, and his wife, Melinda, along with two granddaughters, Jayden and Cassandra. Linda's other son, Rodney Cook, lives in Guam. Gene is also survived by his sister, Doris Morgan, and her husband Richard, Dallas, Texas; younger brothers Richard Talbert, Fallon, Nevada; and William Talbert and his wife, Marti, Yorba Linda, California. Also, numerous nieces and nephews. Gene was preceded in death by his parents, Arthur and Thelma Talbert, and by his first wife, Donnella. Gene Talbert was born on November 11, 1936, in West Middleton, Indiana. He graduated from Kokomo High School and studied briefly at Indiana University before relocating to California in 1955. He later attended California State Polytechnic University's school of business. Gene Talbert served in the U.S. Army from 1959 through 1964 as a cryptanalyst, stationed in Germany. After his honorable discharge, and while in California, Gene was employed in sales by the Bridgeford Meat Co. Yearning to be a business owner, Gene relocated to Ozark, Arkansas in the mid-1970s and purchased Tinker's Liquor in Altus, Arkansas. Gene successfully operated Tinker's until 2014, when he sold the store and retired. Much of his time in retirement was happily spent with the two granddaughters, and cruising and traveling with his wife, Linda. Gene was an avid golfer and a long-time member of the Ozark Recreation Club. He was proud of his multiple holes-in-one and 'shooting his age.' Gene's other passions were regular poker games with a group of close friends and attending deer camp (more for the comradery than deer). At Gene's specific request, there will not be a memorial service. Please consider a donation to the American Cancer Society in lieu of flowers or other tokens of remembrance.

Gene Talbert passed away at home in Ozark, Arkansas, on October 10, 2019 after a brief illness. He is survived by Linda Talbert, his loving wife of eighteen years. Other local kin includes Linda's son, Craig Cook, and his wife, Melinda, along... View Obituary & Service Information

The family of Max "Gene" Eugene Talbert created this Life Tributes page to make it easy to share your memories.

Gene Talbert passed away at home in Ozark, Arkansas, on October...

Send flowers to the Talbert family.