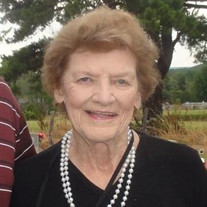 Mary Alice will always be remembered for her fire and passion. She loved to tell fun, amazing stories about her family. She was the family historian. An advocate for education, politics, and the arts. She was fearless when it came to standing up for her beliefs. She loved life and knew what it meant to believe in someone and provide guidance and second chances. She was quick witted and loved to challenge herself, others and ideals. She demanded more for herself and everyone around her. She was independent, confident and unapologetic about who she was and what she thought should be. Her piano came alive when she played anything, but especially when she played boogie-woogie. She was an avid dancer, her favorite being the two- step. For many years she danced several nights a week and attributes her longevity to dancing. She was proud of Scotch-Irish heritage and enjoyed wearing her kilt to the Scottish events in Fort Smith, Arkansas and Virginia. Mary Alice was born February 21, 1923 in Altus, Arkansas to Sam and Evelyn Davis and recently celebrated her 96th birthday. She and her first husband, George Mitchell lived in Alix, Arkansas and farmed land in the Alix bottoms and beside the Davis Lake. She started college at the age thirty and received a BS in Education and Library Science from Arkansas Tech and later a Masters of Arts from the University of Arkansas. She was a teacher and professional artist for more than 4o years. In 1975, she married Ben Gazzola and moved to Roland, Oklahoma. After retiring from teaching, she established a library and for this achievement, she received the Volunteer of the Year Award from the state of Oklahoma in 2000. She was president of the Business Women’s Association in Fort Smith, Arkansas and was honored as their Woman of the Year in 1994. In 2015, she moved to Virginia to live with her daughter. She had many friends everywhere she lived and stayed in touch them throughout her lifetime. She was preceded in death by her brothers Fain and Fred Davis; and her sister Nan Bartlett. She is survived by brother John Davis of Hutchinson, Kansas, cousin Chloe Lamon of Fort Smith, Arkansas, cousin Norma Byrd of Fernandina Beach, Florida, daughter Mary Ann Beard of Gainesville, Virginia, and son Johnny Mitchell of Alix, Arkansas. She loved and adored her four grandchildren: Tony Mitchell, Kevin Mitchell, Daniel Beard, and Kellee Marshall. A memorial reception was held in Gainesville, Virginia for Mary Alice. There will be a graveside service for her at Nichols Chapel Cemetery in Altus, Arkansas on May 5 at 1:00 PM.

Mary Alice will always be remembered for her fire and passion. She loved to tell fun, amazing stories about her family. She was the family historian. An advocate for education, politics, and the arts. She was fearless when it came to standing... View Obituary & Service Information

The family of Mary Alice Gazzloa created this Life Tributes page to make it easy to share your memories.

Mary Alice will always be remembered for her fire and passion....

Send flowers to the Gazzloa family.