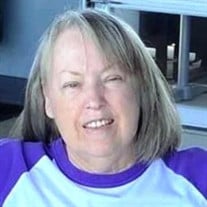 Linda Sue Howe, age 65, of Ozark, Arkansas died Tuesday, January 11, 2022 in Tulsa, Oklahoma. She was a retired worker from Planters, a 1974 graduate of Pleasant View High School and of the Baptist Faith. Linda was born on March 25, 1956, in Mulberry, Arkansas, to Clyde and Melba Pledger Howe. She is preceded in death by her father and one brother, Larry Howe. Linda was a “Hillbilly Pride Mama” through and through to her sons, in addition to all their friends as they were growing up. She continued the tradition of being a number one cheerleader with her grandchildren with all their hobbies, sports, and events. Her love for her children and grandchildren radiated from within. She loved attending all their events, and they were the joy of her life. Her door was always open, and her soul was of a giving nature. She always took special care of her mother and family and never hesitated to help when needed. She spent a lifetime always being present for her family, and she will be missed deeply by all that knew her. She is survived by her mother; two sons, Timothy and wife Laura Howe of Clarksville, Arkansas and Daniel Howe and wife Frankie of Rogers, Arkansas ; four grandchildren, she was “mawmaw” to Jack and Sam Howe of Clarksville and “Grandma Linda” to Shane and Sophia Howe of Rogers; six sisters, Mary Ross of Altus, Arkansas, Norma Roland of Ozark, Carol Ruston and husband John of Cecil, Arkansas, Elaine Elser of Kansas City, Missouri, Melissa Pelts and husband Terry of Ozone, Arkansas, and Teresa Smith of Clarksville; four brothers, Jerry Howe and wife Regina, David Howe and wife Debbie, Glenn Howe and wife Cindy and Michael Howe and wife Mary, all of Ozark. She was a loving Aunt to an abundance of nieces and nephews; she had many friends and loved ones, including Joyce Ratliff and childhood friend Carmen Hensley. A Family Held Memorial Service will be at a later date, cremation arrangements were made under the direction of Shaffer Funeral Home of Ozark.

Linda Sue Howe, age 65, of Ozark, Arkansas died Tuesday, January 11, 2022 in Tulsa, Oklahoma. She was a retired worker from Planters, a 1974 graduate of Pleasant View High School and of the Baptist Faith. Linda was born on March 25, 1956, in... View Obituary & Service Information

The family of Linda Sue Howe created this Life Tributes page to make it easy to share your memories.

Send flowers to the Howe family.