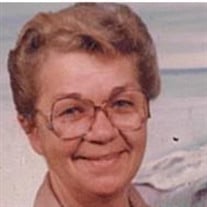 Laquita Hanik, 87, of Norman, Oklahoma passed away on Monday, March 2, 2020 at Grace Living Center. Laquita was born on a chilly evening on October 30, 1932 to Byance and Luther H. James. She attended Hartman public schools until her graduation in 1950. She was married to Andrew Hanik on April 11, 1953. They had two children, Andrea Kay in 1959 and Mark Eric in 1961. The family moved to Hartman from Detroit in 1973. Where Laquita purchase a Combs Home and had it delivered to Hartman. She was employed by Wal-Mart 1974. She was the first woman to ever be promoted by Wal-Mart to supervise and train new cashier’s in new store locations. In 1980 she was employed by Cessna Aircraft, Wichita, Kansas. She returned to the Clarksville area in 1984 and purchased a convenience store called Snappy Snacks where she remained until her retirement 1990. Laquita was an avid fisherman and fished the Arkansas river almost on a daily basis and became known for her expertise navigating the sand bars, currents and her knowledge of the best fishing holes on the river. On Mother’s Day 1994 she had a severe car accident that nearly took her life. She was told she would never walk again. It took 2 years to recover; however she did walk again but with the assistance of a crutch. She purchased a small home in Clarksville in 1996 where she spent many, many happy years gardening and visiting her grandchildren in Norman. She loved her home and built a screened-in porch on her house all by herself with just a small bit of assistance from a neighbor. Like all of us, Laquita faced many adversities and challenges in her lifetime. She met each one with tremendous inner strength and a very strong will. Laquita spent the last two and a half years in a nursing facility in Norman very close to her children. Her handicaps and disabilities from her accident in 1994 had taken a toll on her body and she required additional help and care. Thank you to all of her caregivers in Arkansas and in Oklahoma. You are the reason she lived a long and full life. On March 2nd Laquita was called home to be with her Lord and Savior Jesus Christ. Her strong will and quick wit will be missed by all who loved and cared for her. Laquita was preceded in death by her parents, Luther H. James and her Mother, Byance Phelps James. Siblings: sister Reesie Patterson, brothers; Paul, W.L., Fred, Rob and Coyle James. Her husband, Andrew Hanik and a granddaughter, Catherine Hanik. Survivors include her daughter, Andrea Hanik Carter & her husband Randall D. Carter of Norman, Oklahoma, Mark Eric Hanik and his wife Martha also of Norman. Four grandchildren, Dr. Lawrence Carter and wife Meghan of Norman, Eric Andrew Carter of Norman and his fiancé Dr. Whitney Potter of Columbia, Missouri, Noah Andrew Hanik of Norman, Natalie Helen Hanik of Norman and a great-granddaughter, Amelia Sue Emery Carter also of Norman. Niece Molly McClain and her husband Carl of Clarksville and nephew Luke James and his wife Kathy of Kansas City, Missouri and many, many more nieces and nephews. Graveside service will be held 2:00 PM Monday, March 9, 2020 at Hartman Cemetery with Pastor Darrell Bridges officiating under direction of Shaffer Funeral Home. To leave online condolences visit: www.shafferfuneralhomeozark.com

Laquita Hanik, 87, of Norman, Oklahoma passed away on Monday, March 2, 2020 at Grace Living Center. Laquita was born on a chilly evening on October 30, 1932 to Byance and Luther H. James. She attended Hartman public schools until her graduation... View Obituary & Service Information

The family of Laquita J. Hanik created this Life Tributes page to make it easy to share your memories.

Laquita Hanik, 87, of Norman, Oklahoma passed away on Monday,...

Send flowers to the Hanik family.