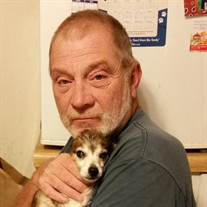 John Mark Mason, 56, of Ozark, Arkansas died Tuesday, May 5, 2020 in Ozark. He had worked for Bridgestone/Firestone for fifteen years; was of the Assembly of God faith; served in the United States Army, Company A 14th Engineer Battalion Fort Ord, California where he drove a 21st Tran Co (car) in the 1988 Summer Olympics motor cade in South Korea; he served his country with pride. While attending Arkansas Tech University in Russellville and Ozark he received a degree in Welding along with an Associates degree. John and Peggy met in March of 1991 and married in July of that year; it was a double dog dare for them to go out and when they did it was love at first sight. Everyone tried talking them out of marriage, saying, it wouldn’t last due to them not knowing each other. Their love stood the test of time with many trials and errors but took it all as it came. John loved hunting and fishing; he was very proud of his children and grandchildren. He was born March 5, 1964 in Little Rock, Arkansas to Jesse E. and Gerry Sue Doyel Mason. He was preceded in death by his father; his grandparents, Landy Doyel, Sr., Georgie Doyel, Hazel Mason White, and Jess E. Mason; and mother in law, Nellene R. Smith. He is survived by his wife of twenty eight years, Peggy A. Haney Mason of Ozark; his mother, Gerry Sue Doyel Coltrane and stepfather Donald; step mother, Linda Mason of Ozark; three sons, Logan Doyel Mason, Triston Washburn and Jayden Washburn all of Ozark; a daughter, Heather Brooke Mason Moore and husband Jeremy of Hector, Arkansas; three granddaughters, Addie Rose Mason of Ozark, Reagan Moore and Raelyn Moore both of Ozark; a sister, Marcella Hagerman of Ozark; and step brother, Gary Birge of New Mexico. He leaves behind many beloved aunts, uncles, cousins, nieces, nephews, and many close friends. Graveside service will be held 10:00 AM Friday, May 8, 2020 at Highland Cemetery with Brother Donald Coltrane officiating under direction of Shaffer Funeral Home of Ozark. To leave online condolences visit: www.shafferfuneralhomeozark.com

John Mark Mason, 56, of Ozark, Arkansas died Tuesday, May 5, 2020 in Ozark. He had worked for Bridgestone/Firestone for fifteen years; was of the Assembly of God faith; served in the United States Army, Company A 14th Engineer Battalion Fort... View Obituary & Service Information

The family of John Mark Mason created this Life Tributes page to make it easy to share your memories.

Send flowers to the Mason family.