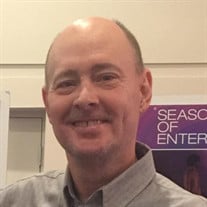 John Keith Bailey, age 58, of Ozark, Arkansas died Tuesday, March 2, 2021. He was born July 19, 1962 in Gadsden, Alabama to Arthur Junior and Annie Belle Sharers Bailey. He was raised in West Monroe, Louisiana, where he lived until he me the Love of his Life and moved to Arkansas. He was a Pentecostal Minister and a self-employed floor installer by trade. He took great pride in his work. His greatest love was his family. He would say all the time “he did not know what he did to deserve his wife and kids, they were the best.” He enjoyed hunting arrowheads, archaeology and fishing with his daughter. He was preceded in death by his parents and a brother, Michael Charles Bailey He is survived by his wife of 26 years, Teresa Murphy-Bailey; a son, Logan Keith Baily; two daughters Eden Diane Bailey and Avery Aleean Bailey all of the home; three brothers, Walter Bailey and wife Mary of West Monroe, Louisiana, Merle Baily of Tennessee and Arthur Bailey and wife Pat of Tennessee; three sisters, Nita Faye Bailey of Eros, Louisiana, Gerri Davis and husband Brian of Eros and Terri Belmont and husband Bobby of Colorado; numerous nieces and nephews. Visitation will be held from 6:00 PM to 8:00 PM Friday, March 5, 2021 at Jethro Pentecostal Church 15363 Lower Jethro Rd, Ozark, AR. Funeral Service will be held at 10:00 AM Saturday March 6, 2021 at Jethro Pentecostal Church with Brother Randy Wead and Brother Lamar Joy officiating under the direction of Shaffer Funeral Home, burial to follow at Oak Ridge Cemetery. Pallbearers are Herman Murphy, Logan Bailey, Walter Bailey, Brian Davis, Anthony Pessnell and Paul Joy Honorary Pallbearers are Arthur Bailey, Merle Bailey, Ronnie Lee, Andy Murphy, the Men of Jethro Pentecostal Church, Bob Butler and Rob Devine.

John Keith Bailey, age 58, of Ozark, Arkansas died Tuesday, March 2, 2021. He was born July 19, 1962 in Gadsden, Alabama to Arthur Junior and Annie Belle Sharers Bailey. He was raised in West Monroe, Louisiana, where he lived until he me the... View Obituary & Service Information

The family of John Keith Bailey created this Life Tributes page to make it easy to share your memories.

Send flowers to the Bailey family.