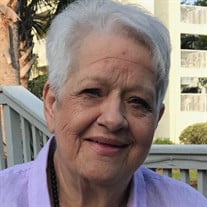 Joan Leding was born on October 18, 1948, in Paris, Arkansas, and passed peacefully on the 5th day of January, 2020, in Paris, Arkansas. Joan loved her children unconditionally, giving them courage as individuals, and confidence to do whatever their hearts desired. After spending many years in Ozark working for the Franklin County Sheriff’s Department as a dispatcher, she continued her career and moved to NW Arkansas working for the Washington County Sheriff’s Department. Later she moved back to Paris, near her family, and worked for the Logan County Sheriff’s Department and the Paris Police Department where she retired. After retirement, she enjoyed spending time with her children and grandchildren in China and South Carolina. She was known for her cinnamon rolls and sock monkeys, which she enjoyed making for family and friends. Joan was fun-loving and generous at heart. Her laughter was contagious, and if you were around her you could count on a great time or a good prank. She loved to scare and joke with people. If you were ever scared by her, that is something you didn’t forget! She is preceded in death by her parents Norman Selph and Irene Mabry Selph, and her loving daughter Lori Leding, who we feel greeted her with open arms. She is survived by her two daughters, Misty Leding Konow and husband Frank of Rock Hill, South Carolina and Kelly Leding and partner Luca Di Lizio of Vicenza, Italy; a son Shane Leding and wife Keiva of Chengdu, China; three grandchildren Jude Konow, and Isadore Leding and Hetepheres Leding, her former husband Kenneth Leding, sister Eula Green of Conroe, Texas, brother Norman Selph, Jr. of Clarksville, Arkansas; and her mother-in-law Mildred Leding along with a host of family and friends. Rosary will be held 1:00PM Saturday prior to the service, January 11th at St. Mary’s Catholic Church in Altus. Funeral mass will be held 2:00 PM Saturday January 11, 2020 at St. Mary’s Catholic Church with Father Pius officiating and Brother Bryan Tinnin speaking and burial at St. Mary’s Cemetery under direction of Shaffer Funeral Home of Ozark. Memorial contributions can be made in honor of Joan to St. Jude Children's Research Hospital, 501 St. Jude Place, Memphis, TN 38105 or by visiting: www.stjude.org To leave online condolences visit: www.shafferfuneralhomeozark.com

Joan Leding was born on October 18, 1948, in Paris, Arkansas, and passed peacefully on the 5th day of January, 2020, in Paris, Arkansas. Joan loved her children unconditionally, giving them courage as individuals, and confidence to do whatever... View Obituary & Service Information

The family of Joan Leding created this Life Tributes page to make it easy to share your memories.

Send flowers to the Leding family.