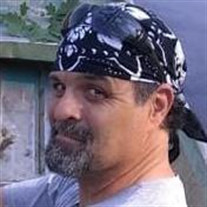 Jeffrey Thomas Corder, 45, of Ozark, Arkansas died Sunday, August 4, 2019 in Ozark. He was an AC Tech in Air Conditioning and Refrigeration, a member of the Trinity Valley Masonic Lodge in Dallas, TX, and was of the Baptist faith. He was born... View Obituary & Service Information

The family of Jeffrey Thomas Corder created this Life Tributes page to make it easy to share your memories.

Send flowers to the Corder family.