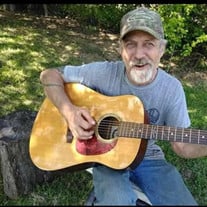 James William Nichols, age 52, of Coal Hill, Arkansas died Friday, July 31, 2020 at his home. He was born July 6, 1968 to Cecil Finus and Ella Mae Workman Nichols in Clarksville, Arkansas. He was a Plummer and of the Church of Christ faith.... View Obituary & Service Information

The family of James William Nichols created this Life Tributes page to make it easy to share your memories.

Send flowers to the Nichols family.