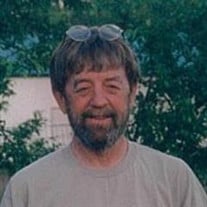 James R. Gowing, 74 of Altus, Arkansas died Thursday, January 9, 2020 in Fort Smith. He was an Artist and Designer. He was born June 20, 1945 in Altus, Arkansas to Chloe and Agnes Harris Gowing. He was preceded in death by his parents; a... View Obituary & Service Information

The family of James R. Gowing created this Life Tributes page to make it easy to share your memories.

Send flowers to the Gowing family.