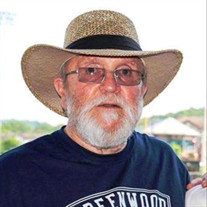 Jack Holt (no middle name but sometimes “flash” or “rabbit”) passed from this world on October 31, 2021surrounded by his wife and children. Jack was a loving husband, father, brother, son, and friend who never met a stranger. Jack was born on September 17, 1950 in Paris, AR. He was the 4th out of 5 children born to Virginia Powell Holt and Jeff "Stumpy" Holt. He was a 1968 graduate of Ozark High School. His passions included hanging with his high school sweetheart and wife of 51 years, Vicki Wisdom Holt, and following his grandchildren around in support of whatever they were doing. Jack would say he was a "Jack of all trades, but master of none" but his family would disagree. To his children, Jack had all the answers! Jack was a proud NRA member and he was retired from OG&E, but still an active shade-tree mechanic and collector of items he thought were of value. He was an engineer of epic proportions when it came to putt ing toys together or fixing something quickly with duct tape and zip-t ies . His true passion and gift was bringing laughter and smiles to everyone he met or encountered on a daily basis. Whether he used a funny mannerism or anecdote, quick witted humor was his fort e'. Jack was a member of Northside Church of Christ but long before accepting the Lord he held many Christian values. He was honest, even when the truth hurt. He helped those in need and was always eager to help his neighbors. He put his family and others in front of his own wants and desires. Even in his last days he was worried about his family and those caring for him. Jack overcame quadruple bypass heart surgery, small bowel Cancer, liver cancer, and countless other ailments all the while living his best life with Vicki and his family. He had three of the heart bypass valves fail, twice, and had stints added. His st rong heart was definitely the reason his body fought hard the entire time he was in hospice. Jack was preceded in death by his parents, his oldest brother Tommy Jeff Holt, and granddaughter Cassandra Michelle Lemley. Jack is survived by the love of his life, Vicki Lynn Holt and their children Jackie (Hays) Lemley of Van Buren, Keith (Halli) Holt of Greenwood, and Angela (Floyd) Fisher of Greenwood. Jack had 8 grandchildren he strongly supported, Allison and Tyler Lemley, Peyton, Dawson, and Ty Holt, and Karli, Kinley, and Kanon Fisher. His remaining siblings are Peggy Banning of Ozark, Betty Jo Cochran of Hot Springs, and William "Bill" Holt of Ozark. He also leaves his brother from another mother, Zeke Burns of Alma. Also, left without someone to sit with at his home are his dogs Miley and lzzie and his beloved '38 Oldsmobile. Visitation will be held from 1:00 Pm to 2:00 Pm Wednesday, November 3, 2021 at Shaffer Funeral Home 2315 West Commercial Street in Ozark. Funeral Service will be held at 2:00 PM Wednesday, November 3, 2021 as Shaffer Funeral Home with Brother Todd Hales officiating under the direction of Shaffer Funeral Home with burial at Highland Cemetery in Ozark. Pallbearers will be Peyton Holt, Tyler Lemley, Dawson Holt, Kanon Fisher, Ty Holt, and Garret Gardenhire. The family would like to thank the staff at Ashton Place and Mercy Hospice for t he care they provided. In lieu of flowers, the family would like for donations to be made to Greenwood Athletics 440 East Gary St Greenwood, AR 72936 In memory of Jack Holt or Arkansas Children's Hospital 1 Children's Way Little Rock, AR 72202

The family of Jack Holt created this Life Tributes page to make it easy to share your memories.

Jack Holt (no middle name but sometimes “flash” or “rabbit”)...

Send flowers to the Holt family.