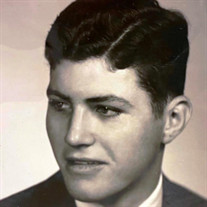 Harold David “H.D.” Shedd, age 92, of Ozark, Arkansas, died Wednesday, May 26, 2021. A Korean War veteran, he retired as a Master Sergeant from the United States Air Force with the following commendations: Air Force Good Service Medal, National Defense Service Medal, Air Force Commendation Medal and Longevity Service Award. After his military service, he worked as shipping manager at Cargill in Ozark for 25 years. He was proud to be a charter member of the Ozark Country Club. David Shedd was a man sincerely devoted to his family and blessed with close knit friends he considered a second family — such as his beloved Deer Camp buddies. He had a kind heart, a warm laugh, and a generous spirit. He will be sorely missed. He was born December 10, 1928 in Ella White, Alabama to Otto Kenton and Lillie Belle Combs Shedd. He is preceded in death by his parents; his wife, Elizabeth “Betty” Wakefield Shedd; a step-daughter, Elizabeth Glae Fraser; three sisters, Lila Lea Shedd, Peggy Joyce Shedd and Betty S. Wyles; and one brother, James Regan “Reggie” Shedd. He is survived by a daughter, Sally H. Shedd and husband David Roy O’Rork; two step-daughters, Jamie F. Jamison and husband Dr. Rodney K. Jamison and Lauren F. Maxwell and husband Dave; a sister, Gloria S. Conway; a brother, Danny M. Shedd; five grandchildren, seven great grandchildren; and numerous nieces and nephews. Visitation will be held at 1:00 PM Tuesday, June 1, 2021 at Highland Cemetery in Ozark. Graveside Funeral Service will be held at 2:00 PM Tuesday, June 1, 2021 at Highland Cemetery with Tim Culver officiating under the direction of Shaffer Funeral Home of Ozark. Honorary Pallbearers will be Don El Whitson, Lucky Cannon, Charles Ray White, Tommy White, Gary Briley, Rick Spessard, Wayne Davis and Danny Robison. Most, if not all, were among David’s Deer Camp and golfing buddies and have many stories to tell of those special times together — some of which, as they shake their heads, they have promised never to divulge to us.

The family of Harold David "HD" Shedd created this Life Tributes page to make it easy to share your memories.

Send flowers to the Shedd family.