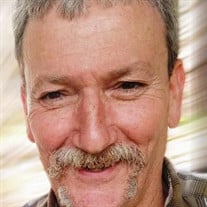 Hank Allen Keech, age 61 of Muldrow, Oklahoma passed away on Saturday, November 13th, 2021, at Baptist South in Fort Smith, Arkansas. Hank was born on February 1st, 1960, in Belle Gardens, California to Herman and Lillie Keech. He was the youngest of 3 children. Hank and his family lived in California until they moved to Eudora, Kansas in 1965. Hank attended school in Eudora for his teenage years. In 1972 the family moved to Ozark, Arkansas. Hank completed his high school years in Ozark graduating in 1978. Hank married and divorced twice, shortly after high school he meet Melinda Ramsey, they were married for 4 years, exchanging vows May of 1981 in Charleston, Arkansas, a year later Melinda gave birth to Hanks only child, Jason Allen Keech. Jason was born April 11th 1982. Hank later married Melody Medlock together they helped raise Jason and Melody’s 3 children until they divorced in 1993 after 8 years of marriage. Hank took pride in working hard. Over Hanks adult life he had very few employers. Shortly after high school he worked for Greenville tubing as a fabricator from Jan 1980 until March 1983. He left Greenville for a job at Whirlpool, after 24 years of employment at the Fort Smith plant Hank was laid-off. Hank quickly found a job at Arkansas Lamp as a production supervisor from 2008 till 2011. Hank was a currently employed at Georgia Pacific in Fort Smith where he had worked as a Press Operator for some time. In Hanks free time, if he was not playing cards or board games with family and friends, he was enjoying fishing, hunting and hiking. Being outdoors was Hanks favorite. He loved to travel and explore the National Parks across the northern states. Most recently Hank loved to hunt Geocaches and enjoyed sharing his new found hiking spots with his mom and sister. Hank was preceded in death by his dad, Herman Keech; his brother Russell Keech; and two grandsons, Ryder and Cason Stubblefield Hank is survived by his son, Jason Keech of Pine Bluff, Arkansas; 2 step-daughters, Christy Hobson (Tiffany) of Muldrow, Angela Cox of Alma, Arkansas; mother, Lillie Keech of Alma; sister, Shirley Keech of Ozark; grandson, Tyler Stubblefield of Cecil, Arkansas; a niece and nephew; three aunts; an uncle; many cousins; and a handful of great nieces and nephews. Visitations will be held from 6:00 PM to 8:00 PM Thursday, November 18, 2021at Shaffer Funeral Home 2315 West Commercial Street in Ozark. Funeral Service will be held at 11:00 AM Friday, November 19, 2021 at Shaffer Funeral Home with Brother J. D. Ellison officiating under the direction of Shaffer Funeral Home with burial at Highland Cemetery. Pallbearers will be Waylon Ziesenis, Cion Harris, Jekai Harris, Jacob Ziesenis, Tyler Stubblefield and Don Farmer. Hank will mostly be remembered for being a devoted son, beloved father and a caring brother.

Hank Allen Keech, age 61 of Muldrow, Oklahoma passed away on Saturday, November 13th, 2021, at Baptist South in Fort Smith, Arkansas. Hank was born on February 1st, 1960, in Belle Gardens, California to Herman and Lillie Keech. He was the youngest... View Obituary & Service Information

The family of Hank Allen Keech created this Life Tributes page to make it easy to share your memories.

Hank Allen Keech, age 61 of Muldrow, Oklahoma passed away on...

Send flowers to the Keech family.