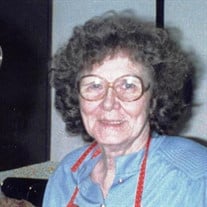 Gloria Lee Honea age 99, of Paris, Arkansas died Saturday, October 2, 2021. She was a homemaker and a member of the Roseville Assembly of God. She was born April 2, 1922 in Altus, Arkansas to Charles and Elsie Pitcock Martin. She is preceded... View Obituary & Service Information

The family of Gloria Lee Honea created this Life Tributes page to make it easy to share your memories.

Send flowers to the Honea family.