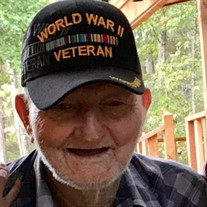 Glenn Dale Murphy, 93, of Mulberry, AR died Friday March 13, 2020 in Fort Smith, AR. He was a Pipefitter and a WWII Army Veteran. He was born August 11, 1926 in Hope, AR to Robert Lee and Essie Mae Ford Murphy. He was preceded in death by... View Obituary & Service Information

The family of Glenn Dale Murphy created this Life Tributes page to make it easy to share your memories.

Send flowers to the Murphy family.