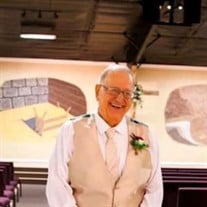 Gail Nixon, age 83, of Ozark, Arkansas died Wednesday January 6, 2021 in Fort Smith Arkansas. He was born June 18, 1937 in Ozark to Fauls and Myna Whitson Nixon in Ozark. He was preceded in death by his wife Mary Jane; his first wife Katherine; two brothers, Jerry and Dow Nixon; three sisters, Bobbie Sue Trahan, Gloria Andrews, and Betty Lorraine Nixon. The family moved to Houston in 1944 for work. He married his wife Katherine in 1958 and together they had 3 boys, Rick, Brad and Jeff. After graduating from the University of Houston in 1961 as an electrical engineer; he worked for Dresser Atlas, formerly Layne Wells. Gail settled with his family in the Spring Branch area of Houston. He retired in December of 1992 to care for his wife Katherine, who passed away December 31, 1993 after an extended illness. After her passing you could find Gail fishing with friends on Lake Conroe, hunting with his boys, and spending time with his grandkids. In 2002 Gail moved back to Ozark, where he lived on the Nixon family farm. In 2003 he married Mary Jane Anderson Nixon. Mary Jane had 1 child, Alyson that Gail often referred to as “the favorite.” Together Gail and Mary Jane created a blended family bound together by their love for one another. Gail and Mary Jane were married for 16 year before she passed away December 21, 2019. After her passing, you would often find Gail watching Fox News, working in the garden he, James and Britt planted or visiting “his girls.” He visited them often and couldn’t wait to be united with them again. While living in Ozark Gail enjoyed working on the farm, golfing with his friends, attending sporting events, and traveling to spend time with his family. He is known to many as “PawPaw Gail.” His laugh was contagious, and his smile brightened a room. He could fix anything if he had a roll of duct tape. He supported his children and grandchildren in everything they did. He was their number 1 fan. He is survived by three sons Rick Nixon and wife Kathy of Marietta, GA, Brad and wife Judy Nixon of Houston TX, Jeff Nixon of Katy TX; a daughter, Alyson Allred and husband Britt of Ozark; ten grandchildren Marvin Potter and wife Christina, Stacey Potter and wife Rachel, Kelsey Shepperd and husband Taylor, Ryan Nixon and wife Becky, Clint Nixon and fiancé Holly, Reed Nixon and wife Anna, Crystal Nixon, Candace Nixon, Jodie Hillard and husband James, and Jake Allred; and nine great grandchildren, Italie, Evyn and Abri Potter, Chloe and Corbin Nixon, Westin Buttles, Kaden, Evelyn, and Tucker Shepperd. Funeral services will be held at 2:00 pm on Monday January 11, 2021 at West Park Baptist Church with Brother Troy Vaughn officiating with burial at Highland Cemetery in Ozark, under the direction of Shaffer Funeral Home. Visitation will be held from 6:00-8:00 pm Sunday January 10, 2021 at Shaffer Funeral Home Chapel, 2315 West Commercial Street in Ozark. Serving as pallbearers are Marvin Potter, Ryan Nixon, Clint Nixon, Reed Nixon, Jake Allred, James Hillard, and Taylor Shepperd. Honorary Pallbearers are Roger Nixon, Scott Nixon, Kaden and Tucker Shepperd, Westin Buttles and Corbin Nixon.

Gail Nixon, age 83, of Ozark, Arkansas died Wednesday January 6, 2021 in Fort Smith Arkansas. He was born June 18, 1937 in Ozark to Fauls and Myna Whitson Nixon in Ozark. He was preceded in death by his wife Mary Jane; his first wife Katherine;... View Obituary & Service Information

The family of Gail Nixon created this Life Tributes page to make it easy to share your memories.

Send flowers to the Nixon family.