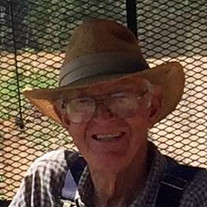 Earl Wyers, 92, of Ozark, Arkansas passed away, Thursday, May 9, 2019 in his home. In his adult life Earl had many accomplishments. He served his country proudly in the United States Army at the end of World War II; was a Cattleman, Bricklayer, and Bricklayer Instructor at Arkansas Valley Vo-Tech in Ozark. He was born April 1, 1927 in Dale, Arkansas to Oscar and Clemmie Yarbrough Wyers. He was preceded in death by his parents; and his wife Pauline Snow Wyers. He is survived by his sister, Opal Marie Carson of Tulsa, Oklahoma, and a brother, Clifford and his wife Betty of Roseville, AR. He had many stories about being a Military Policeman at Fort Chaffee guarding German prisoners. After the military he had many different jobs; traveling with the pipeline, than came home to be the Bricklaying Instructor at Arkansas Valley Vo-Tech. After teaching others the art of Bricklaying he spent several years laying Brick himself. His greatest love in life was the simple life on the mountain caring for his cows and raising fruit and vegetables he shared with one and all. He loved grafting trees for a new variety to see the results. If you wanted to know about an apple, just ask Earl. In 1996 Earl adopted the Aday family, Ray, Randy, and Ola, and helped raise the six grandchildren, Averi, Mandi, Aly, Addison, Ray, and Hunter. Lots of fun was had over a card game. Earl would always say a man’s most noble character is his honesty… and those who knew him can say he lived up to this. Family will visit with friends from 6:00 until 8:00 PM Monday, May 13th at Shaffer Funeral Home, 2315 West Commercial St. in Ozark. Funeral service will be held 10:00 AM Tuesday, May 14, 2019 at Bethel Chapel Church in Mt. Top community with Brother Jonathan Payne, Brother Larry Willis, and Brother Carl Jones officiating and burial at Williams Cemetery under direction of Shaffer Funeral Home of Ozark. Serving as pallbearers are Ralph Wyers, Bill Sampley, Jeff Creek, Jaris Martin, David Wyers, and Allen McElroy. Honorary pallbearers are Tina Creek, Lonnie Mefford, Darrell McCartney, and Bruce McCartney. In Lieu of flowers, memorials can be made to the: Mandy Ketchum Memorial Scholarship Fund, 1st National Bank, P.O. Box 428, Alex, Oklahoma 73002.

Earl Wyers, 92, of Ozark, Arkansas passed away, Thursday, May 9, 2019 in his home. In his adult life Earl had many accomplishments. He served his country proudly in the United States Army at the end of World War II; was a Cattleman, Bricklayer,... View Obituary & Service Information

The family of Earl Wyers created this Life Tributes page to make it easy to share your memories.

Earl Wyers, 92, of Ozark, Arkansas passed away, Thursday, May...

Send flowers to the Wyers family.