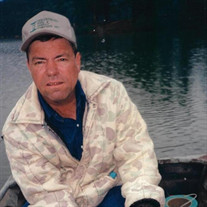 Don Allen Horn, 65, of Ozark, Arkansas went to be with the Lord on November 7, 2020 after a long battle with strokes and a short battle with Covid-19. Don was born on July 28, 1955 to Bob and Wanda Walker Horn in Ozark. He was preceded in death by his parents and grandparents, Chester “Red” Horn and Gussie Taylor Horn and Clyde and Esther Walker. Don was a 1973 graduate of Ozark High School Hillbillies. Don began his adult journey in life by working at age of sixteen for Cargill. Inc. catching turkeys. He worked his way all the way up to maintenance welder and fabricating specialist until his retirement on his fiftieth birthday in 2005. Don met his wife Glenda in the spring of 1978 and they were married on June 2, 1978. They bought their first home in Chrisman Addition where they made a home for their first twelve years, then they found their dream home on Pond Creek Road in 1990 where Don built the shop of his dreams. Don was a perfectionist; he could look at anything and build it. He took great pride in his welding skills and his talent with wood and he made many things over the years for friend and family; fish cookers to knives made of deer horns and old sawblades. Don had a passion for airplanes; he loved to fly. He loved to hang out over at Etna and the airport and their fly-ins, but his biggest passion was fishing and hunting. Then after his stroke on April 16, 2007 his whole world changed. He lived to camp with friends in Heber Springs, Arkansas which became his second home. He made a new group of friends who became like family. Don is survived by his wife of forty-two years, Glenda Phillips Horn of Ozark; his sister, Linda Horn Hufford of Altus, Arkansas; one niece, Bridget Paul Langston and one great-niece, Lindsey Langston, both of Fort Smith, Arkansas; and one great-nephew, Haeven Langston of Jonkoping, Sweden. Graveside services will be held at 2:00 PM Tuesday, November 10, 2020 at Cemetery Ridge Cemetery with the Reverend Zack Belt officiating under direction of Shaffer Funeral Home of Ozark. Open viewing will be from 1:00 PM until 9:00 PM Monday, November 9th at Shaffer Funeral Home, 2315 West Commercial Street in Ozark. Serving as pallbearers are Clinton, Eric, C.J. and Carter West, Paul and Haeven Langston, Mike and Matthew Dunkel, Tommy Nichols and Dillon Harty.

Don Allen Horn, 65, of Ozark, Arkansas went to be with the Lord on November 7, 2020 after a long battle with strokes and a short battle with Covid-19. Don was born on July 28, 1955 to Bob and Wanda Walker Horn in Ozark. He was preceded in... View Obituary & Service Information

The family of Don Allen Horn created this Life Tributes page to make it easy to share your memories.

Send flowers to the Horn family.