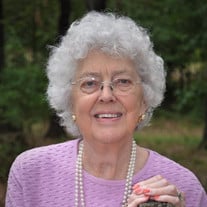 Dolores Lorraine Thompson (91) of Ozark, Arkansas passed away on May 21, 2019 in Fort Smith, Arkansas. She was born in Coal Hill Arkansas on April 24, 1928 and spent her younger years in the Chicago, Illinois area, where she married and started her family, later moving to northern California prior to returning to Arkansas in 1974. Dolores was proceeded in death by her first husband, Walter (Walt) Skulman, her second husband Leslie (Les) Thompson, her parents Ed and Clara Nagel, and brothers Mark and her twin Don Nagel. She attended Arkansas Tech University and The College of the Ozarks and received her B.S and Master Degrees in Education, and taught 1st and 2nd grades at St. Mary’s Catholic School in Altus, Arkansas until her retirement in 2003. She was a devoted teacher, and her former students fondly remember her for her caring and creativity. Besides teaching at the school, Dolores was an active member in the St. Mary’s Catholic Church parish in Altus for many years. Dolores had a beautiful voice, played piano and guitar and was a gifted artist. She loved to sew, and created many high quality clothing and home décor items. Christmas was probably her favorite time of the year - she loved displaying her “Christmas Village,” and would always be searching for items to add to her decorations. She loved to travel and visited many places in the United States and Europe, often accompanied by friends, children and grandchildren. She had the special honor of having an audience with the Pope on a trip to Rome with her husband Leslie and good friends Val and Jerry Faught. Of all the things she loved about her life, the extended family she was so vital to and the many friends she made along the way gave her the most joy. Dolores is survived by sons Briggs Skulman of Fort Smith, Marc Skulman and wife Rita of Fort Smith, Greg Skulman and wife Wendy of Dallas, TX, and Robert Skulman and wife Shirley of Fort Smith. She is also survived by granddaughters Macy Skulman of Chicago, IL, Laura Skulman of Savannah, GA, Alexandra Skulman of Dallas, TX, and Julia Skulman of Fort Smith. In addition she is survived by step grandson Nicholas Bowden and wife Marie and great grandchildren Ellison Bowden and Benjamin Bowden of Dallas, TX. She is also survived by her sister in law Reba Nagel and her children Kimberly Nagel, Bernadette Dillman, Walter Nagel, Gary Nagel, Chris Nagel, Brett Nagel, Jennifer Underwood, Becky Goerig, stepsons Leslie Thompson, Mark Thompson, Randall Thompson and his former wife Jodie and their sons Matthew and Ryan of Ozark, and stepdaughters Virginia Saxer and Cynthia Newstead. A Rosary at 8:30 and a Mass at 10:00 will be held to celebrate Dolores’s life on June 1, 2019 at St. Mary’s Catholic Church.

Dolores Lorraine Thompson (91) of Ozark, Arkansas passed away on May 21, 2019 in Fort Smith, Arkansas. She was born in Coal Hill Arkansas on April 24, 1928 and spent her younger years in the Chicago, Illinois area, where she married and started... View Obituary & Service Information

The family of Dolores Skulman Thompson created this Life Tributes page to make it easy to share your memories.

Send flowers to the Thompson family.