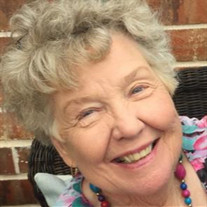 On July 10, 2021, just three short days prior to her 83rd birthday, Deloris (Stubblefield) Alberty, surrounded by her loving family, peacefully entered Heaven to be reunited with the love of her life of 58 years, Donald Leroy. Deloris was a strong woman with a big heart, who never turned down an opportunity to help her family, friends, and community. Mom, known as Mamaw to her grandchildren and Great Mamaw to her great-grandchildren, knew of her illness and was ready to go to Heaven and dance with the love of her life again. Deloris always loved being fully involved in life and bringing as much happiness as she could to her family, friends and her community. Growing up in Chouteau, Oklahoma, she learned early on that she was gifted with talents in singing and musical instruments. As a young girl, she often sang and played at weddings, church choir, and social events, and she taught piano to local youth. As a young woman, wife, and mother, she participated in local community events and ensured her children the opportunities to be involved in various activities to enrich their lives. Deloris was born in Oilton, Oklahoma on July 13, 1938 to George and Edna Ruth (Howell) Stubblefield. As a young child, her family relocated to Chouteau, Oklahoma where she spent the remainder of her youth. She was proud of her Oklahoma “Sooner” heritage and loved the rolling hills as well as the plains of Oklahoma. She often reminisced about spending weekends and summers on the Oklahoma landscape with her Stubblefield grandparents on their farm just outside of Chouteau. With these memories she built a love and passion for country living. At the same time, she adored her Howell branch and spent time at family gatherings and making precious memories with her Howell cousins, her beloved aunts and uncles, and her grandparents. Chouteau, Oklahoma in the 1930’s – 1950’s was a lot like the picturesque town of Whistle Stop, Georgia in the movie Fried Green Tomatoes. Deloris actually worked at the local diner as a young teenager meeting, greeting and serving the locals and others traveling through. She had colorful stories of her time there. She graduated as salutatorian from Chouteau High School in 1956, and she maintained life-long friendships with many of her childhood friends from Chouteau. In the summer of 1955, she met Don Alberty quite randomly while visiting her dad on a highway job he was working in Stilwell, Oklahoma. On October 28, 1956, they were married at the First Baptist Church in Chouteau and spent the next 58 years together. They spent a large part of their life raising their children in Lone Star, Texas. She was always actively involved with her children’s scout and school activities and encouraged them in every way, including sharing her love of music, piano, and dance. In 1976, they moved their family to Ozark, Arkansas, where they purchased a large acreage from Alfred and Louise Hawkins. She was finally “at home” in the canopied trees and mountains of northwest Arkansas where they built their dream home. She absolutely loved being there for many, many years. While in Ozark, Deloris was very active in community organizations and held officer positions in several. She had a flare for the dramatic, and her passion centered on the Foothills Little Theatre Group during its entire tenure. She directed the Christmas Spirit charitable event for many years, sang in Christmas Cantatas, wrote children stories and poems, wrote a Jethro Community column for The Spectator, was a member of The Red Hat Society, TOPS Club, and was nominated for Citizen of the Year by the local Chamber of Commerce. Additionally, she was the first to win the title of Senior Ms. Ozark. In addition to her “earthly” activities, Deloris was an active member of the First Presbyterian Church in Ozark, sang in a Gospel Quartet called Higher Ground, and had a deep love and friendship for her Lord and Savior. She developed many close, enduring, and special friendships during her years in Ozark. Deloris held the position of Rural Mail Route Carrier with the United States Postal Service for decades until her retirement. Her higher education involved accreditation with several government entities such as the Civil Air Patrol and the United States Postal Service. She maintained her accreditations throughout her career. As someone who did not let “the grass grow under her feet” when not working or participating in community activities, she canned the harvested vegetables from their garden, made pear preserves, and delighted in cooking and providing delicious fare for her family and friends. She was an accomplished cook and knew her way around a kitchen. Deloris was preceded in death by her parents, George Stubblefield and Edna Ruth Stubblefield; her husband, Don Alberty; her infant son, Michael; her grandson, Kelly “Blake” Brightwell; her great- granddaughter, Holland Ludlow; and her brothers, Melvin and Stanley Stubblefield. She is survived by her son, Don Allan Alberty and his wife, Mary Jane; daughter, Charise Alberty; daughter, Crystal Alberty Brightwell and her husband, Kelly; grandchildren, Jackie Kirkendall and husband Dustin, Crystal Ludlow and husband Jeff, Brandon Brightwell, Bailey Savell and husband Luke, Katherine Alberty and fiancé Fabian, Elizabeth Alberty, and Rebecca Alberty; great-grandchildren, Ava Kirkendall, Charlotte Kirkendall, Will Kirkendall, Nora Ludlow, Liam Ludlow, and Aspen Savell; and many beloved extended family members. Deloris’s life will be celebrated on Saturday, August 7, 2021 at 2:00 p.m. at the Shaffer Funeral Home in Ozark, Arkansas. A private interment will be held by the family.

On July 10, 2021, just three short days prior to her 83rd birthday, Deloris (Stubblefield) Alberty, surrounded by her loving family, peacefully entered Heaven to be reunited with the love of her life of 58 years, Donald Leroy. Deloris was a... View Obituary & Service Information

The family of Deloris Alberty created this Life Tributes page to make it easy to share your memories.

Send flowers to the Alberty family.