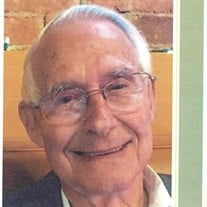 Delbert Lee “Chan” Anderson, 86, of rural Frankfort, Indiana died November 28, 2019 at I.U. Health Arnett Hospital, Lafayette. He was born October 1, 1933, in Siloam Springs, Arkansas to Steve and Bertha (Buce) Anderson. He was preceded in death by his parents; a brother; three sisters; and a grandson, Steven Cole Anderson. He married Patsy Stidham on October 16, 1958 in Jay, Oklahoma. Delbert was a 1952 graduate of Colcord, Oklahoma High School. A veteran of the U.S. Army, he served from 1951-1955 in the Korean War. He was a minister and Electrician, owning Anderson electric in Siloam Springs and Ozark. He was an ordained minister with the United Pentecostal Church International. He served as Pastor in Huntsville, Ozark, and in Alma. He retired from his electric business in 2008 and in 2011 retired from his church in Alma. He had lived in Siloam Springs for thirty eight years and Ozark for twenty nine years and thirteen years in Alma before moving to Frankfort in 2013. The church and his family were his life. Delbert is survived by his wife, Patsy Anderson of Frankfort; a son, Donnie Anderson and wife Sandra of Ozark; two daughters, Teresa Cupstid and husband Ronnie of San Antonio, TX and Cheryl Lytle and husband Danny of Frankfort; a sister, Ercille Philpott and husband Bill of Gentry; four grandchildren, Stephanie Edwards and husband Patrick of Booneville, Teronda Wallace and husband Terry of San Antonio, Aiden and Brantley Lytle both of rural Frankfort; two step- grandchildren, Misty Sampley and husband Brent of Ozark, and Dee Crowley and wife Jakki of Holiday Island; and nine great grandchildren and several nieces and nephews. Family will visit with friends 11:00 AM until 1:00 PM two hours prior to the service Saturday, December 7th at Shaffer Funeral Home, 2315 West Commercial street in Ozark. Funeral service will be held 1:00 PM Saturday December 7, 2019 at Shaffer Funeral Home Chapel and burial at Highland Cemetery under direction of Shaffer Funeral Home. Serving as pallbearers are Dickie White, Brent Sampley, Paul Williams, Billy Ruston, Doug Dye, and Patrick Edwards.

The family of Delbert Lee Anderson created this Life Tributes page to make it easy to share your memories.

Send flowers to the Anderson family.