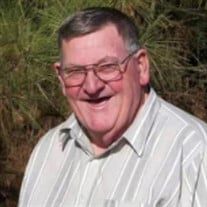 Dale Martin, age 70 of Hartman, Arkansas passed away at home surrounded by his family Thursday, March 25, 2021 at his home. He was a truck driver and a member of the Holiness Church in Scranton, Arkansas. He was born July 29, 1950 in Mountain... View Obituary & Service Information

The family of Dale Martin created this Life Tributes page to make it easy to share your memories.

Dale Martin, age 70 of Hartman, Arkansas passed away at home...

Send flowers to the Martin family.