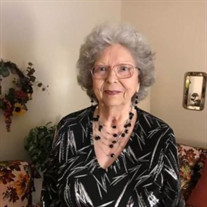 Cloyce Juaree Childers age 88, of Cantonment, Florida died Monday, January 3, 2022 in Clarksville, Arkansas. Cloyce was a homemaker and a member of the First Baptist Church of Cottage Hill, Florida She was born December 22, 1933 in Newton... View Obituary & Service Information

The family of Cloyce Juaree Childers created this Life Tributes page to make it easy to share your memories.

Send flowers to the Childers family.