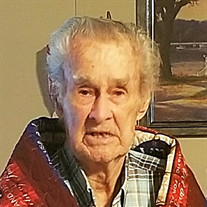 Cloy Ray Skinner, 93, of Ozark, Arkansas died Monday, September 9, 2019 in Ozark. He worked construction, was a Reverend, a Navy Veteran, and was of the Pentecostal faith. He was born February 4, 1926 in Damascus, Arkansas to Lee and Pearl... View Obituary & Service Information

The family of Cloy Ray Skinner created this Life Tributes page to make it easy to share your memories.

Send flowers to the Skinner family.