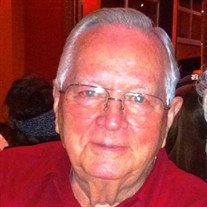 Claude Allen Smith, age 92, formerly of Tulsa, Oklahoma died Monday, December 27, 2021 in Rogers, Arkansas. He was a graduate of Ozark High School and served in the United States Air Force as a medic from 1946 to 1949. He married his childhood sweetheart, Bettye Matthews Smith on June 3, 1950. He worked in the oil field supply industry ultimately reaching the position of Vice President of Sales for Vinson Supply Company and was a member of Quail Springs Baptist Church of Edmond, Oklahoma. Claude was born on December 15, 1929 in Ozark, Arkansas to Walter Smith and Ola Nichols. He is preceded in death by his loving wife of 71 years, Bettye Matthews Smith; his parents; and a sister Francis Shelton. Claude is survived by his son, Craig Smith and wife Kimberly of Rogers; two daughters, Christy Morgan and husband Kevin of Williamsburg, Virginia and Carla Chupik and husband Roland of Edmond , Oklahoma; seven grandchildren that were the light of his life, Matthew Morgan and wife Laura, Julie Holloway and husband Ryan, David Morgan and wife Ciara Thornhill, Ryan Miller and wife Jenna, Sarah Morgan, Catherine Smart and husband Jared and Meagan Andrus and husband Matt; and 8 great-grandchildren, James Morgan, Jack, Rylie and Grace Holloway, Collin and Emerson Miller, Johnathan Smart and Merritt Andrus. Funeral Service will be held at 1:00 PM Wednesday, December 29, 2021 at Shaffer Funeral Home with Reverend Craig Smith officiating under the direction of Shaffer Funeral with burial at Highland Cemetery. Pallbearers will be Ryan Miller, Matthew Andus, and Ryan Holloway. Honorary Pallbearers will be Matthew Morgan, David Morgan and Jared Smart. He is loved and missed by those whose lives he touched. In lieu of flowers, contributions can be made to a local Alzheimer's Association.

Claude Allen Smith, age 92, formerly of Tulsa, Oklahoma died Monday, December 27, 2021 in Rogers, Arkansas. He was a graduate of Ozark High School and served in the United States Air Force as a medic from 1946 to 1949. He married his childhood... View Obituary & Service Information

The family of Claude Allen Smith created this Life Tributes page to make it easy to share your memories.