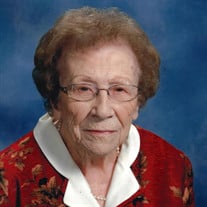 Chella M. Stokes, 99, of Ozark, Arkansas passed from this life Friday, December 25, 2020 in Ozark. She was a long time member of the First United Methodist Church of Ozark. She was born April 17, 1921 in Johnson County Arkansas to Archie and... View Obituary & Service Information

The family of Chella M Stokes created this Life Tributes page to make it easy to share your memories.

Chella M. Stokes, 99, of Ozark, Arkansas passed from this life...

Send flowers to the Stokes family.