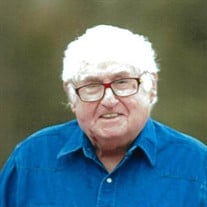 C. G. Fisher, 89, of Mulberry, Arkansas, entered into Heavenly Rest October 25, 2020 in Fort Smith, Arkansas. C.G. was born May 19, 1931 in Mulberry to the late Gervis and Louise Moore Fisher. C.G. was a U.S. Army Veteran of the Korean Conflict.... View Obituary & Service Information

The family of C. G. Fisher created this Life Tributes page to make it easy to share your memories.

Send flowers to the Fisher family.