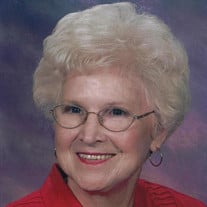 Bobbie Jean Entrekin Penix, 80, of Ozark, Arkansas died Sunday March 1, 2020 in Fort Smith, Arkansas. She was a hairdresser and a member of First Baptist Church of Ozark. She was born July 13, 1939 in Lumberton, Mississippi to Wylie and Bill... View Obituary & Service Information

The family of Bobbie Jean Entrekin Penix created this Life Tributes page to make it easy to share your memories.