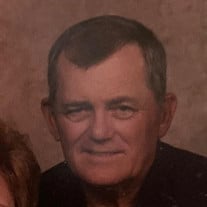 Bob Darter, 74, of Altus, Arkansas died Friday, December 27, 2019 in Altus. He served in the U.S. Army from 1962 thru 1968, was honorably discharged having received many outstanding military achievements and awards, and was of the Methodist faith. He was born May 31, 1945 in Muenster, Texas to Charles E. Sr and Wynneth Long Darter. In his lifetime he explored and dabbled in many industries. He forever found a love for working in the Oil and Gas Industry, as well as owning his own business. After an on the job accident, he soon returned to Arkansas. His true love and passion was watching his grandchildren play and grow. He was playful, very ornery, enjoyed making people laugh, and enjoyed life to the fullest with Eva and his children. He was preceded in death by his parents; a son, Charles Bobbie Darter, Jr; two brothers, Jimmie E. Darter and Charles E. Darter Jr. He is survived by the love of his life, Eva Patton of Altus; four daughters, Marie Kirkpatrick of Altus, Rebecca Collins and husband Earl of Alix, Christie Orson of Andrews Texas, and Bobbie Nicole Goodwin and husband Brian of Andrews, Texas; a son, Bobby Lee Kimbrough and wife Melissa of Ozark; a sister, Charlene Smith of Ozark; twenty one grandchildren; ten great grandchildren; and two great-great grandchildren. Family will visit with friends from 12:00 until 2:00 PM prior to service on Tuesday, December 31st at Shaffer Funeral Home, 2315 West Commercial St. Ozark. Funeral service will be held 2:00 PM Tuesday, December 31, 2019 at Shaffer Funeral Home Chapel with Brother Mike Pennington officiating and burial at Highland Cemetery under direction Shaffer Funeral Home of Ozark. Serving as pallbearers are Shawn Kirkpatrick, Brian Goodwin, Jr, Jesse and David Collins, Billy Gibson, and James Smith. Honorary pallbearers are Darrell Mayner, Cecil Zolliecoffer, Patrick Spurling, Earl, Zach, and Luke Collins, Jeremiah, Zack, and Colton Goodwin, Tucker, Colton, and Hunter Orson, Bryan, JJ, and Lukas Banhart, Austin Gibson, Brian Goodwin, Sr., and Bobby Lee Kimbrough.

Bob Darter, 74, of Altus, Arkansas died Friday, December 27, 2019 in Altus. He served in the U.S. Army from 1962 thru 1968, was honorably discharged having received many outstanding military achievements and awards, and was of the Methodist... View Obituary & Service Information

The family of Bob Darter created this Life Tributes page to make it easy to share your memories.

Send flowers to the Darter family.